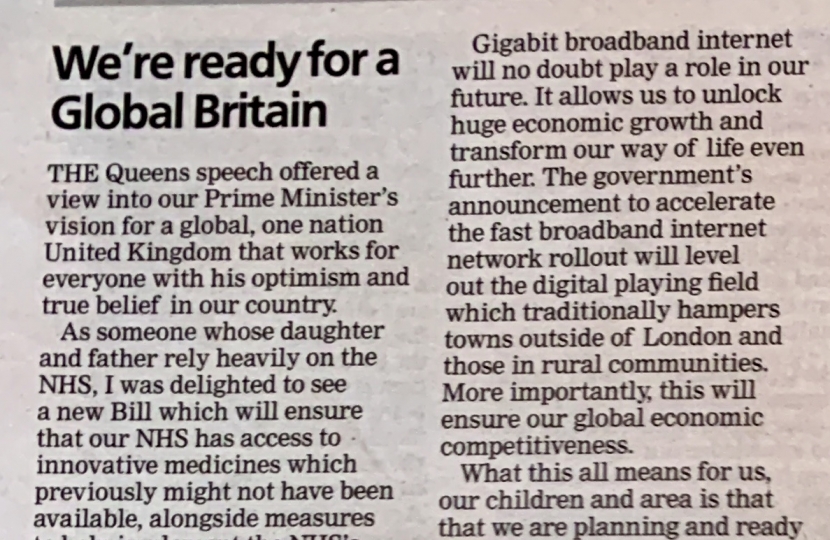 This week’s Queens speech offered a view into our Prime Minister’s vision for a global, one nation United Kingdom that works for everyone with his optimism and true belief in our country.

As someone whose daughter and father rely heavily on the NHS, I was delighted to see a new Bill which will ensure that our NHS has access to innovative medicines which previously might not have been available, alongside measures to help implement the NHS’s Long Term Plan which was introduced in January 2019. This Medicines and Medical Devices Bill will promote our thriving life sciences industry and create further collaboration with the NHS to enable more home grown and manufactured products to be developed post Brexit. Furthermore, as you all know there is already a firm commitment to build 40 new hospitals, with a £33.9 billion a year increase in NHS spending by 2023 / 2024.

People I know are sick and tired of hearing about criminals being let out too early from prison. This is why Boris wants to shake up criminal sentencing – this will ensure that those serious, violent and sexual offenders will now spend more of their sentences in prison. This will be done by ensuring that those with sentences of four years or more will not be eligible for release until they have served at least two-thirds of their sentence. Put simply, offenders need to be spending more time behind bars. Otherwise, victims will lose confidence and trust in our judicial and criminal system.

But of course, we cannot tackle crime without our police, and we must back them. This is why I was particularly pleased to see this government acknowledge the bravery and sacrifices that our men in blue make every day in our local communities by bringing in a ‘police covenant’, much like the protections given to members of our armed forces. This will hopefully affirm how our communities respect and value those in the Thames Valley Police force who protect us all.

And of course, there is Brexit, the focus here is around a Bill which allows for a deal with Brussels to be legislated, alongside arrangements for a transition period, EU nationals’ rights, and a protocol for Northern Ireland. Legislation will also be tabled so that we can make the most of a post Brexit Global Britain - on our fishing, farming, various export industries and financial services.

The government is also introducing a new Immigration and Social Security Co-ordination Bill which will end free movement and deliver a truly fair and modern point-based immigration system that will attract the best and brightest; allowing hardworking immigrants like my parents who believe in Britain to come from across the world and to be part of our society.

Gigabit broadband internet will no doubt play a role in our future. It allows us to unlock huge economic growth and transform our way of life even further. The government’s announcement to accelerate the fast broadband internet network rollout will level out the digital playing field which traditionally hampers towns outside of London and those in rural communities. More importantly, this will ensure our global economic competitiveness.

What this all means for us, our children and area is that that we are planning and ready for a Global Britain; one that is trading internationally, utilising its modern and innovative industries and investing in our future.