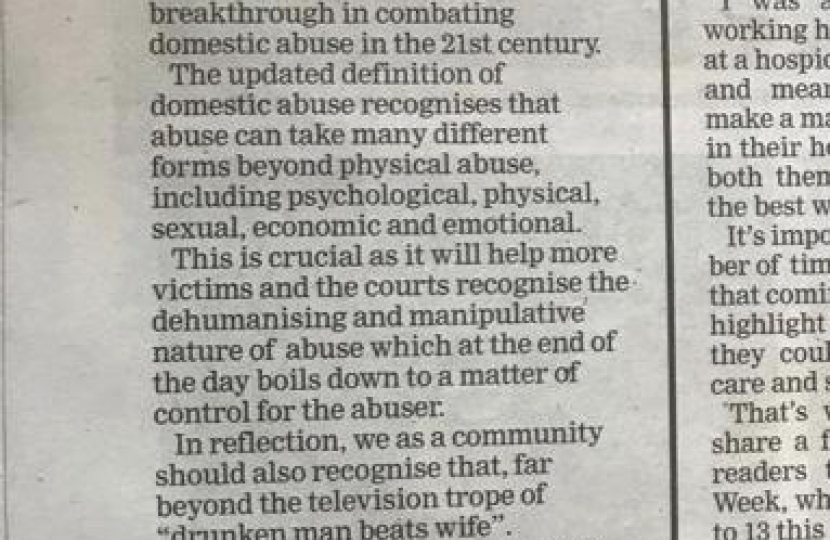 Last Thursday, the Government’s Domestic Abuse Bill passed its Second Reading in the Commons, meaning it is now one step closer to becoming law.

My understanding of the Bill is that it seeks to create a statutory definition for domestic abuse, strengthen protection for victims of abuse, and prevent individuals from potentially abusive situations. Having personally dealt with the human consequences of domestic abuse cases as a lawyer, this Bill is a breakthrough in combating domestic abuse in the 21st century.

The updated definition of domestic abuse recognises that abuse can take many different forms beyond physical abuse, including psychological, physical, sexual, economic and emotional. This is crucial as it will help more victims and the courts recognise the dehumanising and manipulative nature of abuse which at the end of the day boils down to a matter of control for the abuser.

In reflection, we as a community should also recognise that, far beyond the television trope of “drunken man beats wife”. Domestic abuse is a scourge that affects men, women, children, and people in same-sex relationships, and that we should come together for the victims in their time of need.

Whilst our scope as local councillors is limited, my colleagues and I will offer whatever assistance that is within our capacity to help with domestic abuse. I would also encourage those living in the shadow of abuse to take action by calling the police, the National Domestic Violence Helpline (0808 200 0247) or the Men’s Advice Line (0808 801 0327). There are also charities in our area that accommodates victims in different kinds of circumstances.

I am pleased by the progress that we as a country have made and hope that the Bill will soon find its way to our statue books.